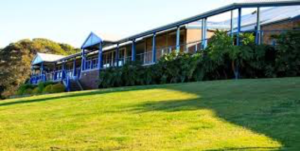 properties, with a view to rolling out an LED lighting up-grade. Their aim was to reduce their energy bill and eliminate the constant replacement of lights.

The Collaroy Centre is a conference facility on a 10 acre site overlooking the Collaroy beach.  There are 60 bunk rooms and 30 hotel rooms on the site plus dining rooms, conference rooms, a lecture theatre and a gym.

The project got under way in November 2015 and took 2 months, with a break for Christmas.

The Collaroy Centre was busy at this time, hosting children from around the State. The conference and hotel rooms were also often in use.  This required Tim from Proenergy to not only design and specify the job but also to be the dedicated project manager. We had to ensure the job did not interfere with the smooth operation of the Centre.

The buildings at The Collaroy Centre are now about 20 years old and had a typical range of “fluoro – generation” lights, ripe for up-grading to LED generation lighting:

The payback calculation is JUST for the energy saved.  The Centre maintenance staff are no longer swapping tubes and globes every day.  Their Emergency lights have battery moulded which can be replaced by a non-electrician, so the need for electrical contractors has been reduced significantly.