FluoroCycle is a voluntary product stewardship scheme that seeks to increase the national recycling rate of waste mercury-containing lamps.

Lamp recycling can help reduce the amount of mercury being sent to landfill.  FluroCycle is funded and operated by the Lighting Council of Australia, orginally established with funds from the Federal Government.

Why does Australia need FluoroCycle? 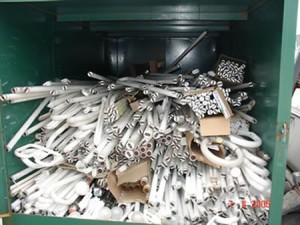 In Australia, an estimated 95 per cent of Fluoroescent tubes and bulbs containing mercury end up in landfill each year. That’s about 40 million fluoro tubes or 600 Kg of mercury each year is dumped in the natural environment, never to be reclaimed. Fluoroescent tubes and CFL’s ar
e the largest single source of mercury, and their disposal is the main source of Australia’s total annual emissions of mercury. EVERY FLUORO TUBE and CFL BULB CONTAINS MERCURY….  …..if they crack, evacuate the room so better to recycle.

Who are the target Signatories?

FluoroCycle targets businesses which operate, maintain or supply commercial and public lighting which accounts for the majority of lighting waste.

What does it mean to be a Signatory?

The key responsibility of being a FluoroCycle signatory is to keep mercury out of the environment.  This means taking an active inyterest in what happens to fluorescent tubes and CFL bulbs when they are being replaced or removed.  Every signatory will have policies, procedures, audits and other controls to ensure that any fluoroescent tube that is in a building is safely handled, especially when it comes to disposal.

There are signatory companies who will pick up spent tubes and bulbs in containers and take them to a dedicated crushing and re-cycling plant.  There are only two machines in the Sydney basin and this means making sure you have details of companies set up to transfer the fluorescent waste safely to these locations.

Where can I find information on lamp recyclers in Australia?

Currently, there are three companies in Australia operating machinery to safely crush and contain fluoroescent tubes and CFL’s.  They are: –

Most large waste management organisations in Australia will have arrangements to pass on waste lighting to one of these recyclers. These include organisations  Chenwaste, Down to Earth Waste Removal

Smaller organisations may wish to contact EcoCycle or Lamp Recyclers to purchase their EZY-RETURN Recycling Packs which can be filled then dropped off at any of Australia Post’s 4000+ outlets nationally.