It was only in 1993 that BLUE LED was invented. 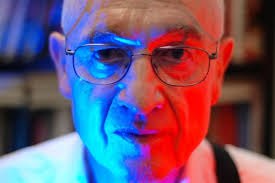 Although red and green LEDs had been around for many years, blue LEDs were a long-standing challenge for scientists in both academia and industry. Without them, the three colours could not be mixed to produce the white light we now see in LED-based computer and TV screens. Also, the high-energy blue light could be used to excite phosphorus and directly produce white light – the basis of the next generation of light bulb.

Today, blue LEDs are found in people’s pockets around the world, inside the lights and screens of smartphones.
White LED lamps, meanwhile, deliver light to many offices and households. They use much less energy than both incandescent and fluorescent lamps. This is because LEDs convert electricity directly into photons of light, instead of the wasteful mixture of heat and light generated inside traditional, incandescent bulbs. Those bulbs use current to heat a wire filament until it glows, while the gas discharge inside fluorescent lamps also produces both heat and light.

Inside an LED, current is applied to a sandwich of semiconductor materials, which emit a particular wavelength of light depending on the chemical make-up of those materials. Gallium nitride was the key ingredient used by the Nobel laureates in their ground-breaking blue LEDs. Growing big enough crystals of this compound was the stumbling block that stopped many other researchers – but Profs Akasaki and Amano, working at Nagoya University in Japan, managed to grow them in 1986 on a specially-designed scaffold made partly from sapphire.

Four years later Prof Nakamura made a similar breakthrough, while he was working at the chemical company Nichia. Instead of a special substrate, he used a clever manipulation of temperature to boost the growth of the all-important crystals.

In 2014, the 3 Japanese physicists were awarded the Nobel Prize for their contribution to science and the saving of energy.

LEDs create light by electroluminescence in a semiconductor material. Electroluminescence is the phenomenon of a material emitting light when electric current or an electric field is passed through it – this happens when electrons are sent through the material and fill electron holes. An electron hole exists where an atom lacks electrons (negatively charged) and therefore has a positive charge. Semiconductor materials like germanium or silicon can be “doped” to create and control the number of electron holes. Doping is the adding of other elements to the semiconductor material to change its properties. By doping a semiconductor you can make two separate types of semiconductors in the same crystal. The boundary between the two types is called a p-n junction. The junction only allows current to pass through it one way, this is why they are used as diodes. LEDs are made using p-n junctions. As electrons pass through one crystal to the other they fill electron holes. They emit photons (light).

The invention of the blue LED made possible a simple and effective way to generate white light. By coating a blue LED with a phosphor material a portion of the blue light can be converted to green, yellow and red light. This mixture of colored light will be perceived by humans as white light and can therefore be used for general illumination. The first white LEDs were expensive and inefficient. However the development of LED technology has caused their efficiency and light output to rise exponentially, with a doubling occurring approximately every 36 months since the 1960s, in a way similar to Moore’s law. This trend is generally attributed to the parallel development of other semiconductor technologies and advances in optics and material science, and has been called Haitz’s law after Dr. Roland Haitz.37

As LED materials technology grew more advanced, light output rose, while maintaining efficiency and reliability at acceptable levels. The invention and development of the high-power white-light LED led to use for illumination, and is rapidly replacing incandescent and fluorescent lighting.

The blue LED was final piece of the puzzle to create the RGB LED which can produce any color of light. LEDs can now produce over 300 lumens per watt of electricity, while lasting up to 100,000 hours.